Well… I didn’t want to do it.
I didn’t want to buy this kit (or one of the other kits), but I figured there would be a few Mom’s who would pick up a kit and spend time baking with their kids, and those Mom’s might like a few pointers about the Rudolph Cake Pop Kit.

First of all, I really didn’t like the profile design. Yes, it’s different, and that is what caught my attention; however, as I was making them, I just thought they looked stranger and stranger.

Here’s what comes in the kit:

Gingerbread Cake Mix
Vanilla Frosting Powder
Cinnamon Candy Melts
Cake Pop Stand
Cutter
20 Sticks
20 Red Candies for Noses
Black Icing Pen
Piping Bag
Instructions
The instructions to make these cake pops are straight forward and easy to do. I baked my gingerbread cake and allowed it to cool. Then I made my frosting with the packet and supplied my own butter and powered sugar.

I may have rolled these a bit too thin. It was hard to judge, but they were thick enough for the stick to hold on to and not break it. I made 20 heads and then had some leftover cake pop batter.
I noticed that the noses and ears broke off easily as I was pushing the cake out of the cutter. Maybe if it was thicker it wouldn’t do that?? I don’t know. But, just wanted you to be aware of it.
With this kit, as well as the others that I have reviewed, there just isn’t enough candy melts included.
The instructions tell you to melt your candy wafers in a tall glass. I melted mine in a large water glass and for the first 3 or 4 pops, I could dunk straight down and coat the it. However, the glass got too narrow and I could no longer dip that way. I transferred the candy to a smaller open bowl and then I had to dip one side at a time – see the photo above. 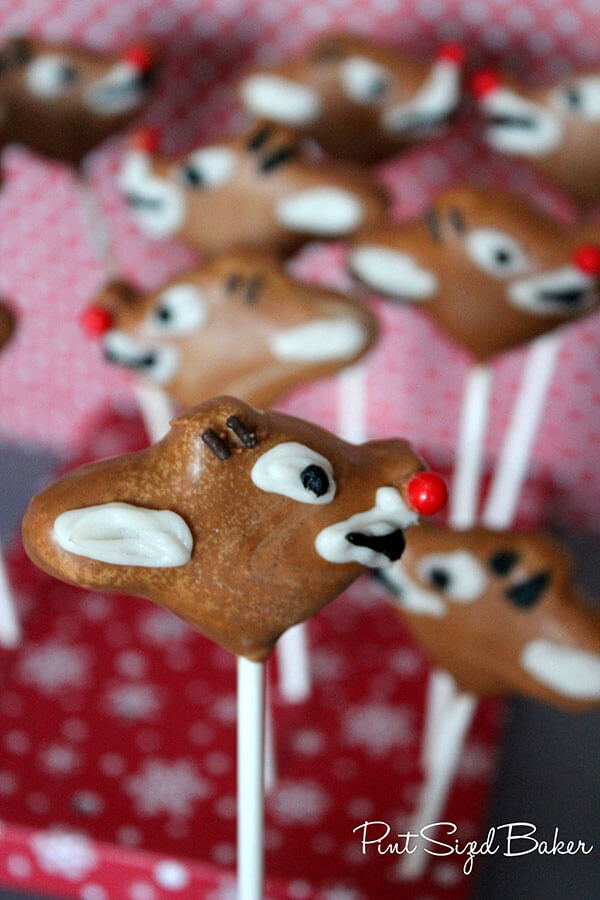 Decorating the face was also difficult.
The candy noses were heavy and a few fell off before the candy dried.
(I didn’t like the red nose in profile. I thought it looked like he had a big nose ring .)
I had a difficult time decorating his features. I placed half the vanilla frosting into the supplied piping bag and added the ears, antlers, and mouth. The frosting isn’t liquid, so the small hole I made just wan’t doing what I needed it to do. I cut it a bit larger, but the frosting on the candy just didn’t stick very well.
The black icing pen was also difficult to draw with. There was no way I could outline the eyes like in the picture on the box.
The lines were too thick and I think poor Rudolph looked like he had Rabies. Not good.
For some of the antlers, I used chocolate Jimmies instead. I thought they looked better.

So, as I was running out of candy after only 10 reindeer heads, I decided to try and save this cake pop disaster.
I rolled a few heads into a round shape, searched for some pretzels for antlers and made some reindeer of my own.
The only pretzels I had were Snaps, so I trimmed off the edges to make them more “antler” like. Regular pretzels work better. I dipped, then added the antlers and his nose. Once they were dry, I just used the black icing to draw on the eyes and smile.
Also, what is going on with the candy melts? See the discoloration and the “striping” on them? The candy was melted and all the same color, so I don’t know why this happened. My guess would be that the candies were old and it’s a separation issue.

I liked these little guys better.
One more *personal* complaint – I did not like the Gingerbread and Cinnamon combination. These pops were way too sweet for my sweet tooth!

These are the three kits that I found at my local Wal-Mart. All in the $8 range.
Honestly, I could not bring myself to buy the snowmen – where are their noses??

Review of the Rudolph Cake Pop KitPros:
– Easy Instructions
– Like the included stand
– More than enough cake and frosting
– Piping bag for adding details to the face
Cons:
– Not enough Candy Melts for 20 pops
– Frosting used to decorate is difficult to apply
– Black Icing in pen is thick and would not outline
– No bags wrap cake pops
– Discoloration of the candy melts – looked odd.

Overall – This would be a fun project to use up some time over the holidays. Don’t expect to get all 20 cake pops done unless you pick up an extra bag of chocolate candy melts. If the shaped heads are too much to handle, just roll balls and make your own reindeer with pretzel antlers. The kids will enjoy those just as much.

If you make these yourself, please let me know what you thought of the kit!

Are checkerboard cakes still a thing? I hope so be

January is all about comfort food and that means a