Thanks everyone for your support and kind words on Friday and over the weekend. My running is NOT a New Year’s Resolution. I have a 5K goal and I want to do all I can to meet that goal, but I don’t want to feel like a failure if I don’t make it. Know what I mean?
Anyway, Zombies Run training day 2 was a success. So far I like this program. It’s been simple enough and I like that there is a 10 minute “free run” where I can run or walk as I want. I’ve been pushing myself to run MORE than walking, but it’s still kicking my butt. Well, here’s to a smaller butt.
However, if I eat these donuts, the running will be for not.

I have a confession… I tried to make donuts once before, but they were a failure. I found an awesome Nutella muffin recipe that I converted into a Biscoff donut recipe. But, there’s a trick to filling mini-donut pans. I over filled the pan, I underfilled the pans – it was just a mess. They tasted “ok” but they weren’t photo worthy and they didn’t look like other donuts that I saw on the internet.

Over the Christmas break, I was found a Krusteaz Apple Cinnamon Muffin Mix in the back of the cupboard and thought  I could play with it… so I made it up and played with the mini-donut pan again. This time -SUCCESS!!

Don’t feel like you have to make donuts from scratch. Keep it easy on the weekend and go with a muffin mix. It’s so much easier when you have the time or energy.

BTW – The Cake stand and cupcake stands were wonderful Christmas gifts from my Mother-in-Law! She’s the BEST! Thank you! 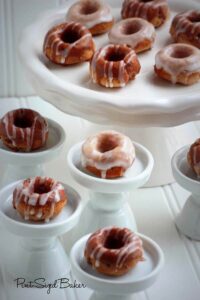 For the Vanilla Glaze

For the Chocolate Glaze

Instructions
Combine Muffin Mix and 1 cup of water. Mix thoroughly and add half to a gallon size baggie. Snip a 1/4 inch off the tip of the baggie and squeeze batter into a greased mini donut pan.
Bake at 425 for 10-15 minutes and allow to cool for 2 minutes before removing from pan.
Allow donuts to cool for 15 minutes before adding the glaze.
Stir ingredients for the vanilla glaze and chocolate glaze in separate shallow bowls. Make glaze as thin or as thick as you prefer. I made mine a thin and dipped them twice.
Dip donuts into glaze and set on wire rack to dip and harden. Give them a second dip if you made your glaze on the thin side, like I did. Drizzle opposite color glaze over top for some color contrast.
Serve to hungry little mouths and enjoy their excitement!
Powered by Recipage

Oh my goodness, these are adorable. Thanks for linking up to Tasty Thursdays. I'm back from vacation and will start a new party tonight. Thanks, Nichi - The Mandatory Mooch

I am confused ... did you mean 'naught' when you said 'the running will be for not'?Please put up with me. As a proof-reader of many years, this is some of my picky things. Their/there/they're also bothers me immensely. Sorry.

Those stand are gorgeous! I'm totally envious! I'm also so jealous that I don't have any donuts-cheat or not!! Actually the muffin mix is a great idea! Thanks for sharing at One Creative Weekend!

Oh the presentations is lovely! They look so so delicious!